Charly got into farming because he needed a job. He was a mason, a block layer, for 25-30 years. When the work seemed to disappear in 2008, it gave him a chance to pursue an interest in growing organic food.

Hadley Farmship was started in 2008, which is when he and his wife, Ruth, bought the half-acre property. 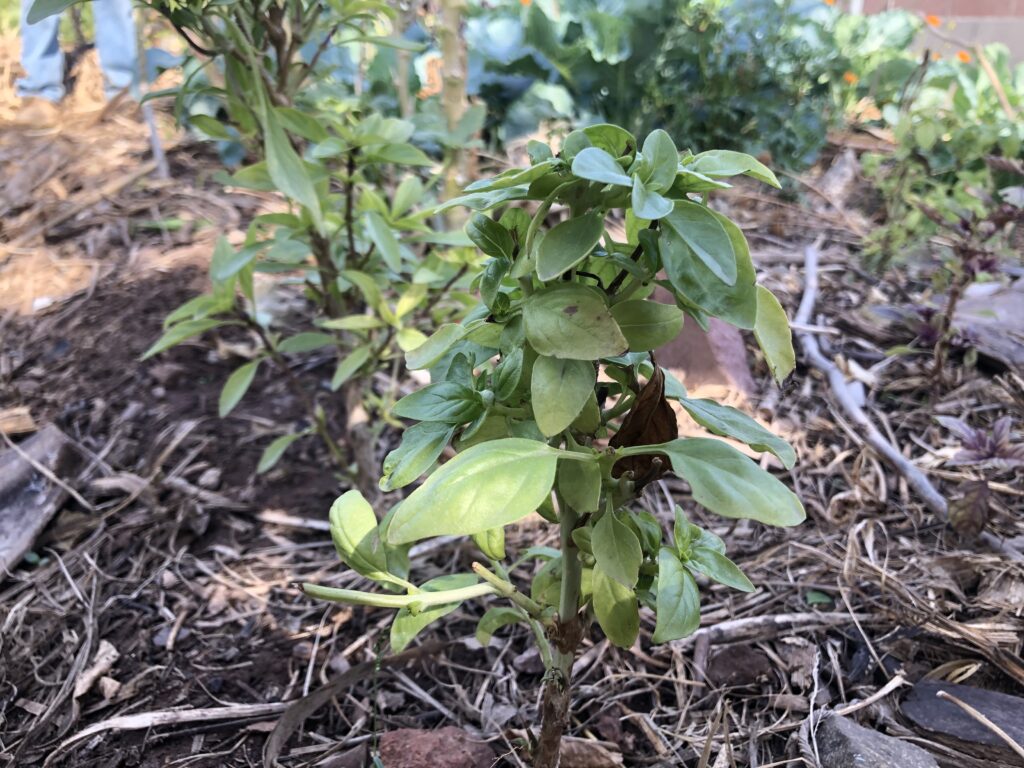 His primary purpose is to bring organic material to the garden. Without feeding the soil, nothing happens. First, he has to accept mulch and disperse it amongst the garden. When he is ready to plant, he’ll remove the mulch and plant seedlings, and then lightly mulch it again. As the plants grow, his favorite work is bed maintenance. When The plants are 2-3 inches tall, he weeds, and thins and mulches them really nicely. If he does a good job on a bed when they are 2-3 inches tall, the plants take care of themselves after that.

There are simple instructions for being a market gardener. Plant what you can and bring what you got.

He only attends the Downtown Phoenix Farmers Market because it’s all he has time for. A couple of days out of the week he’ll prepare for the market. The other days he’ll be planting.

This Summer had the most extreme heat he’s ever witnessed. He’s been working outside in Phoenix for 40 years too. He couldn’t work long days, because it was too hot. It seems that even the heat-loving plants had stunted growth, such as okra and eggplant.

If you want to have a good product on the table in December & January then you have to germinate and perform well in August and September. He had a very lousy August when it came to getting anything to start. Even stuff that was shaded didn’t do well. The heat really affected the germination of his young plants in August & September. 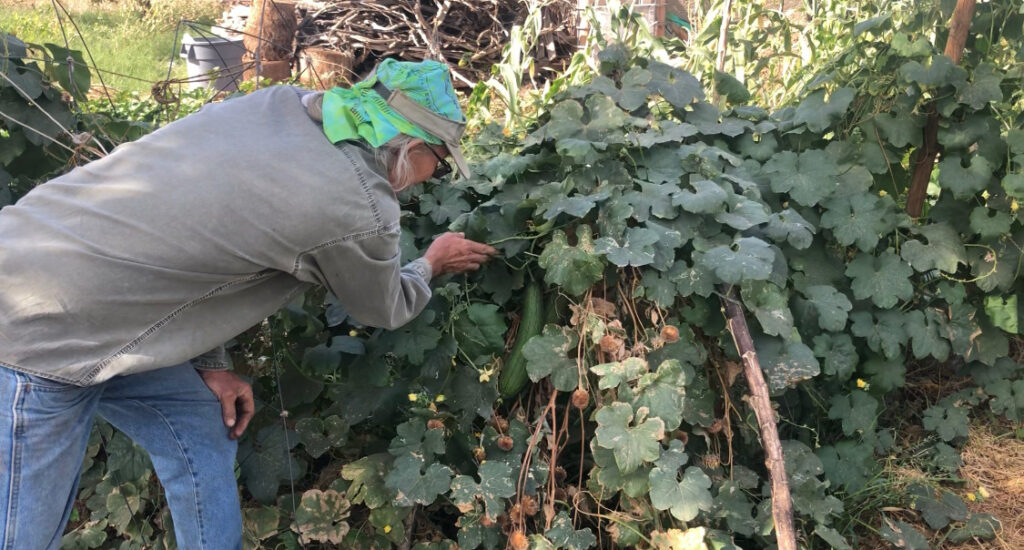 He grows his own food. 50% of his calories come from his garden. That was part of his goal, to know where your food is coming from and knowing that it’ll be there. He wasn’t certain about scale at the start. 18,000 square feet is under cultivation in his garden. He believes he could raise a small family of that size. Without any industrial inputs or excessive money to be spent on resources, he filled up two tables worth of food at the market for many years. He believes subsistence farming on a half-acre plot is feasible.

Loofah tip is his favorite green. Loofah vine is great for subsistence eating because it produces a lot of vines.

All the fruits he grows must be pollinated. There are lots of pollinators such as bees, hoverflies, birds, and wasps. You won’t grow certain produce without pollinators unless you hand pollinate.

He believes the heat lessened his nighttime pollinators this year. His edible gourds have a white flower that opens overnight. His gourd production has been about a third of normal. You have to do what you can to keep your garden attractive to insects. Plant flowers, build habitats to help attract insects. Inside of every garden, he’ll leave pieces of wood along the edges of beds, which helps create habitat. 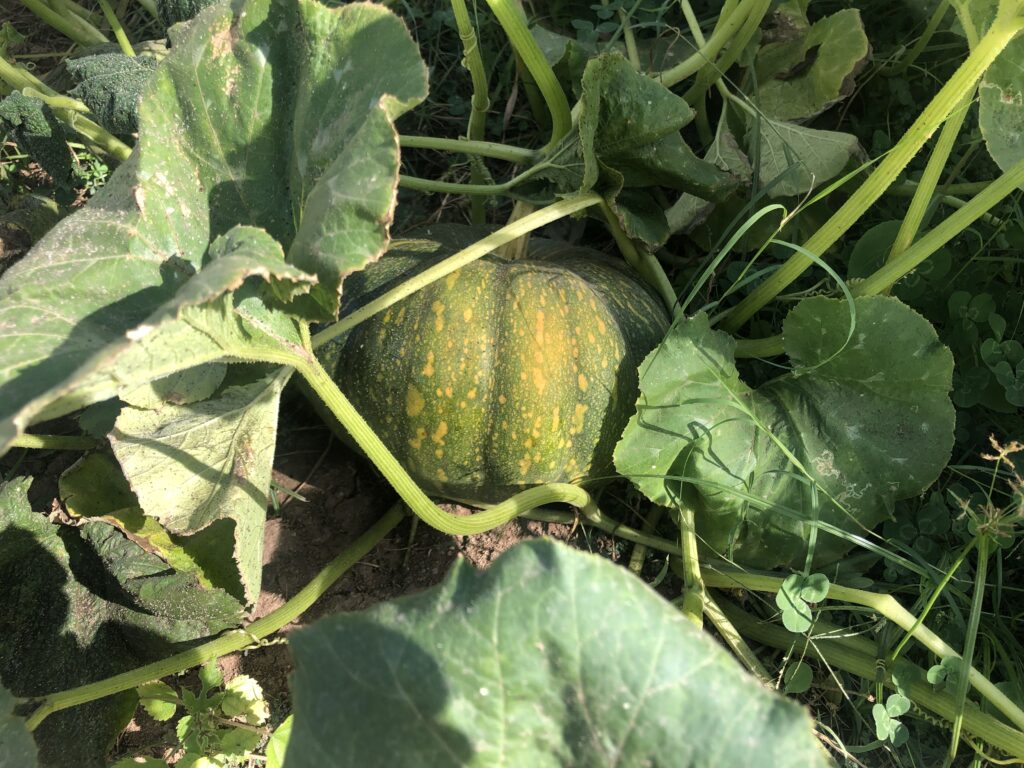 If you want to save seeds in the garden so that they’ll volunteer and grow where they want to, then you have to let plants mature and go to seed. He does this often with basil.

Mulch does a lot of things. One of the primary purposes of mulch in the desert is to provide shade and helps with the retention of moisture in the soil. Palm fronds also offer shade. If he doesn’t put palm fronds down on his trenches that bring in irrigation water, then they’ll dry up and start cracking the soil. Two-inch cracks in the soil can form in a few days during the Summer. The drying will start going into the beds. Irrigation water doesn’t flow freely through the mulch. Palm fronds are easy to lay down and move. They also prevent weeds from growing in the trenches. It takes him about 15-20 minutes to pick up all the palm frowns before irrigation and another 15-20 minutes to put them all back in the trenches.

“The people at the market are so fantastic,” Charly notes. He works in his garden by himself, and therefore it is nice to catch up with his friends every Saturday market. He enjoys the banter and socializing with other vendors/producers while setting up each market. He doesn’t just leave the market at the end of the day with sales, but with a fulfilled soul because of the great people he is surrounded by. 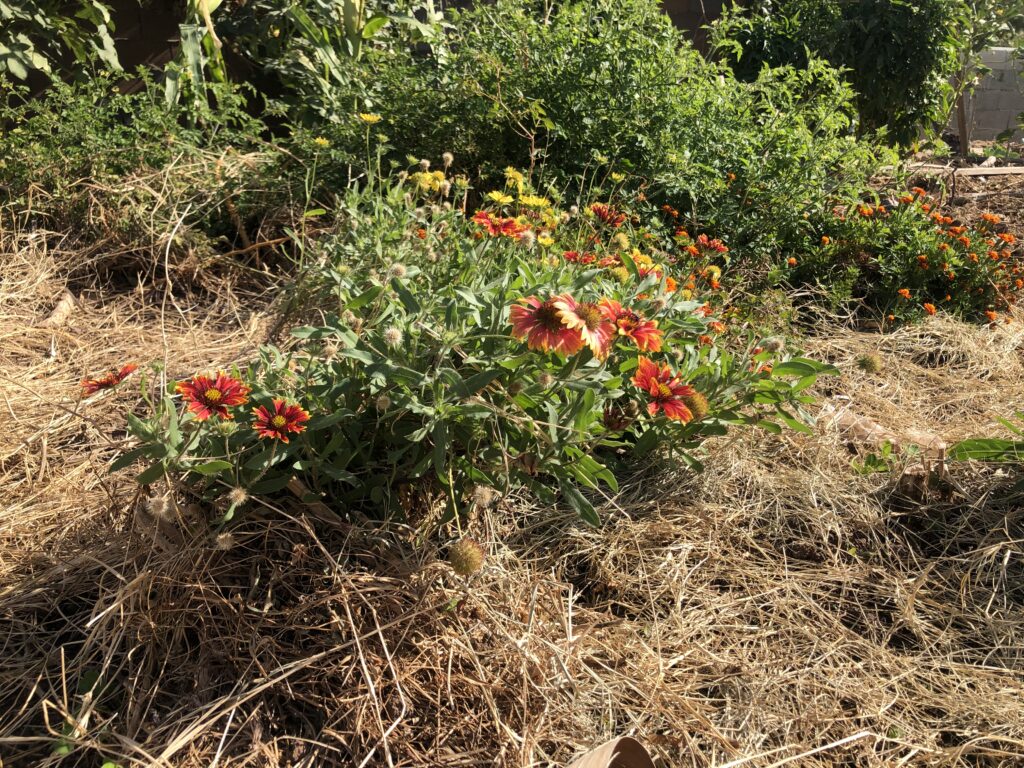 Charly’s work in the garden has provided him mental peace. There is so much to learn about plants and ourselves while in the garden. The work is grounding. Observing and recognizing the connection we share with flora and fauna is powerful. Such connections become increasingly blurred for those who don’t spend time observing and experiencing what our natural world has to offer. Our well-being is dependent upon abiotic and biotic factors, or ecosystems.

The garden is an ecosystem. From the bee that pollinates the plants, which reproduce to provide us food and cleaner air, to the microbes in the soil that break down organic waste and provide nutrients for the growth of plants and food for bees, and to the air temperature which effects moisture retention in the soil and the growth of plants. It’s all a system to which we are very much connected.

I’m hitting hard on this connection because our ecosystems are under threat due to anthropogenic induced climate change. Therefore, our well-being is under threat. Climate change is complex, but the science shows that humans are disproportionately affecting the function of ecosystems globally in a negative manner. Our actions can carry significant impacts, especially as a collective. Just as we’ve collectively contributed to climate change, we can also work together to reverse the impacts we’ve caused thus far.

Never cease to learn how your actions may impact others and the ecosystems we are inherently tied to.